Ben -
Just as a free-lance, volunteer roving reporter, I'm with Andrew Grove of the Indian Ocean Hotel and a community minded person, asking your thoughts Andrew on the Cape Bouvard property Development in Scarborough.

Andrew –
It’s necessary to have development in Scarborough because it’s been stagnated for a number of years in the potential of the facilities and the environment that we have. It’s so fantastic that we should be doing more to draw not only the local community but the tourism market as well.
Perth doesn’t have an icon tourist destination other than Fremantle and Kings Park. Scarborough should be a third icon in that, and we’ve been surpassed by Cottesloe and Hillary’s, whereas thirty-forty years ago Scarborough probably had more weight as a tourist destination than what it does now. The beachfront is dominated by liquor outlets, and Observation City has a large accountability in regards to the antisocial behaviour that happens in Scarborough.  I think the council needs to look and address the way that Observation City operates the bars there.
In regards to the new (Cape Bouvard) development to facilitate a community based type scenario in Scarborough and a place where tourists want to come, we need to have an infrastructure that caters for them. There are enough units in Scarborough already.  what we need are actually things for people to do, ideally a marina would be the best option that we could possibly achieve but extremely difficult, and then secondly the sinking of the highway. Both of those are very long-term projects probably forty or fifty years but in the short term while the residential development that’s been put forward both on the Coles Luna site and the Cape Bouvard West Beach Lagoon site are up for discussion, it must be set that they have a large mix of retail commercial as well as residential.
There is no point building more blocks, tower blocks such as Observation Rise, Sand Castles and Spin Drifter which cater for a select residential crowd and have no interaction with the local community. They don’t provide any services, they don’t provide any outlets for even tourists or locals, and the residents themselves are unable to partake in any social activities bar what the four walls that’s created by the dwelling. I would really like to see Scarborough having a movie cinema, have a selection of cafe’s, restaurants and small bars. We want to go away from the massive bar type situation like Observation City, and have more intermit type venues that cater for a broader section of people instead of particularly marketing towards the 18 to 25 age group, as the LookOut or the Club Atlantis does and then the 25 to 40 age group as the Stamford does, there’s not a great mix of people, its very stereotyped. The set backs for that new development seem to be very limited, the buildings sitting right on the footpaths of the development. I personally would like to see at least a 3 or 4 metre set back to create an entry statement into each building and make a boardwalk type atmosphere along the beachfront. 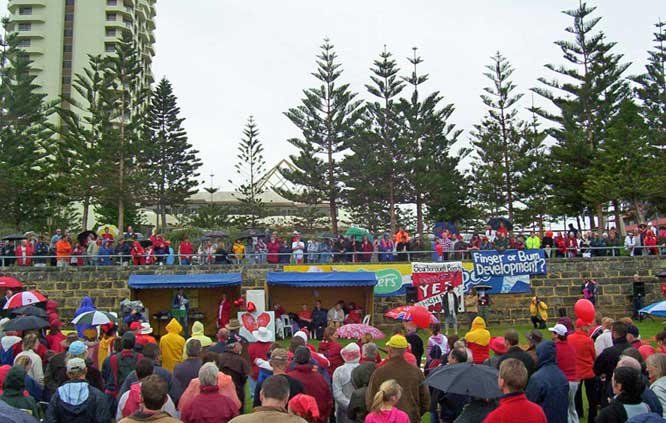 16 May 04 Rally against Scarborough high rise attracted about 700 people.

Cape Bouvard property development proposals for Brighton Beach, Scarborough are were at www.brightononscarborough.com

Back to Brighton Beach or Property Developer Perth home page.